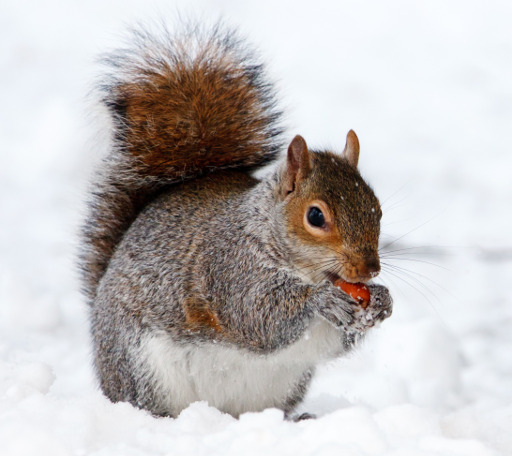 I do not own a large piece of property, but it is enough to provide a miniature landscape for a great many life forms even in winter.

I can sit here in the morning leisurely eating breakfast and be entertained with the antics of several acrobatic squirrels. I have a flock of house sparrows who shelter in the boxwood shrubs and dart out to feed on the bread crumbs I Leave out for them.

And then there are the crows who never fail to alert me when they want any kind of food I might have left over from the previous days dinner.

A pair of bright blue Blue Jays have been seen checking out this small sanctuary and a pair of cardinals are often seen darting among the leafless branches of the old apple tree.

I often see the unmistakable foot prints of rabbits in the fresh snow. They come after dark to nibble at the birdseed that is scattered about under the feeders.

Today a large hawk landed on the fence causing a panic among the sparrows. He certainty is a handsome and impressive bird even though he is a fierce predator. But he’s not greedy. He takes only what he needs in order to survive.

It may be the heart of winter dormancy but it certainly is not an inactive time. Even though my garden sleeps beneath a thick blanket of snow there's no absence of life. It’s a small landscape that teems with an assortment of creatures all occupied with the business of living.