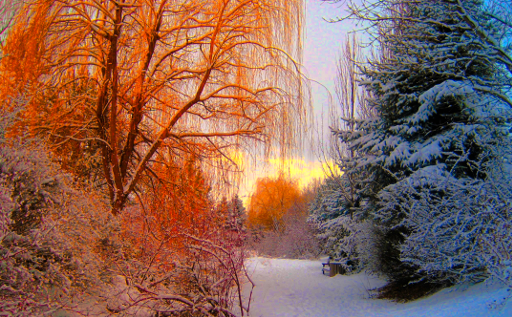 The snow falls as softly as downy feathers from the breast of a snow white dove. In silence it falls creating a diaphanous curtain that wraps the earth in a coverlet of ermine.

With unremitting persistence it falls, deceptively beautiful and silent as death, for its presence challenges life itself in the face of its onslaught.

The story of life’s persistent endurance can be read in the patterns of a multitude of varied foot prints to be observed in a walk through the dormant garden.

Like enigmatic messages written on parchment or in a hieroglyphic alphabet, these varied foot prints reveal the survival struggle of the creatures of the north country.

Touches of green can still be observed in the garden where the waxy green foliage of the boxwood is never shed and where the stately evergreens stand like silent guardians over the winter earth.

The snow continues to fall from a pewter sky, unrelenting and transformative, the ermine cloak of winter whose presence is the undisputed overlord of an ice encrusted earth.