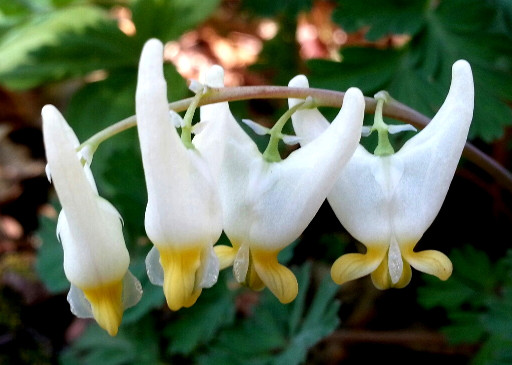 The April air was soft against my skin like sun warmed silk.

All around me the air echoed with the song of robins and cardinals and song sparrows.

Everywhere I looked the springtime ephemerals were at the height of their exquisite display.

Ephemerals are those early spring flowers that bloom for only a short time in early spring. They appear to be fragile and very delicate but in fact the plants themselves if not their flowers are very hardy.

Among them are the crocus, April violets whose scent would make them the envy of angels and the cilia which I have always called squills in honor of one of my favorite poets; Sarah Teasdale who began one of her poems with the words “I’d forgotten just how blue a bed of squills can be”.

There’s a yard I visit every year at this time. Its special Because Its been allowed to revert to nature. Its like a small wooded glen in the heart of the city.

There the entire yard is a carpet of blue squills stretching from the front to the back where a wooden bench is placed right in the middle of the floral profusion.

It’s not the least bit difficult to imagine fairy folk dancing there in the April moonlight.

There’s even a small clump of Dutchman’s breeches that like the squills bloom and then disappear. The tiny white flowers really are shaped exactly like bloomers.

I treasure these brief blooming flowers of April and never miss an opportunity to relish their brief appearance after a long barren winter.